So it’s July 20, 2014 and it just hit me it’s be almost two months since I left London. I realized I never wrote about my trip back to France, or Greece, or last week in London, so this is going to be a long post.

After I returned from Ireland, I stayed in London for like five days I think ( I really should’ve done this two months ago so bear with me) (also also it’s 1:36 AM because I can’t sleep) and took an exam and whatever. I don’t remember anything significant happening. But the next Tuesday I went back to Paris (and took a two hour train ride instead of a twelve hour bus ride) and stayed with my Uncles for almost a week. I got to see them in Birmingham & Oxford, if you remember (see post titled “I’m alive, Hello, Hola, Ciao) and they coincidentally had a wedding in Nice. So we met up in Paris and like I loved it the first time so I’m really glad I got to go back.

I have to say I had a horrible head cold and I didn’t get to drink as much French wine as I would’ve liked to but nevertheless it was an awesome trip. Their friend Elaine joined us and we stayed in a really cool apartment on Rue de Pecquay in Paris. I wish I had taken more pictures of the apartment. It was really awesome with two lofts and a really cool shower. We bought museum passes and I think we ended up doing like 18 out of the 56 things on the pass so it was totally worth it. I got to see more of the Louvre, besides dear old Mona, WHO SUCKS BY THE WAY. I actually got pretty into photography while I was there and took some really (well I think) awesome shots 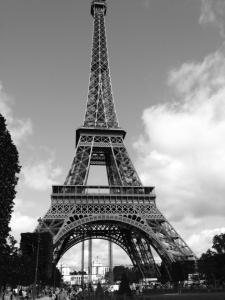 This was a picture of the Eiffel Tower (I mean obviously edited it but still I think it’s kinda rocking. The only thing I am sad that I didn’t get to do well two things although I guess I can’t be picky, is go back to Trocadero, which is this awesome elevated platform thing that has an unreal view of Paris & the Eiffel Tower, I went there my first time.

The other thing I didn’t get to do was climb the Eiffel tower.

Well let’s be honest…I 115% wanted to take the elevator. But we didn’t end up doing either so that was a tiny little bummer in the grand scheme of things. I did climb the Arc D’Triomphe at night though and get this beautiful view:

I definitely noticed some big differences from when I went to Paris in March compared to when I went in May. Although it rained almost the entire time both times I was there. And I got a cold the first time I was there and had a cold the second time I was there. But overall I really can’t complain. I took so many pictures that I overfilled my camera and had to revert to my phone. One of my favorite things we did were the Gardens of Versailles. We went to Marie Antionette’s home and i had the best instagram caption planned out but it didn’t happen so I guess I can tell you guys now. I was going to get gluten free cake or a cupcake or something ( I’m clearly getting used to America you can’t get a cupcake in France duh but I laughed after I typed it and realized how American I’m becoming again) and take a bite of it or hold it laughing in front of her house and have the caption be “let them eat gluten free cake” ha ha ha i’m so funny I know.

Anyways that was the inside of her litle home down the garden. it was actually pretty far from the main palace. Guess that’s how she stayed in shape. Okay also people in order to not make these posts too long I’m doing separate ones.
Also police on roller skates in France rock. 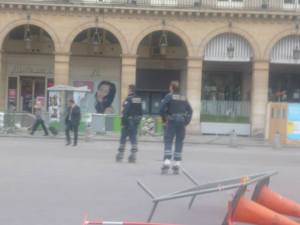