This is the question in the mirror facing Meagan and I as we walked through the Club to Catwalk exhibiton at the Victoria and Albert Museum today. For our class, we went to the V&A and were given time to explore. I have no idea how this exhibit had anything to do with Victoria or Albert, but it was possibly the most favorite exhibit I’ve ever seen at a museum, ever.

It featured fashion from the 80’s which was one of the coolest times to be in London. I didn’t start taking notes until we got upstairs unfortunately, but the first designer we saw opened his flagship store in Shoreditch(which is where we live!) It was absolutely incredible to see designs made by designers I know today such as Vivienne Westwood, and John Galliano (two of my favorite designers).

I saw pieces from the Vivienne Westwood Time Machine Collection (1988). There was a “jumper” (sweater) that was hand knit by Richard Torry who worked with Westwood and Mclaren at the end of the 70’s, “taking his knitting needles to punk clubs”. Unfortunately, we couldn’t take any pictures so I don’t have any of the exhibit. Truthfully, I keep googling things and trying to find them, even off the V&A website but I’m not having much luck.

One of the collections I really loved was the “Witches” collection by Westwood and Mclaren. It was their final collaboration together and featured pieces inspired by NYC’s graffiti artist Keith Haring.  At the V&A there were also pieces from their other collections such as “Pirate” which was their first catwalk collection.

The best part ( and i’ll probably say this about every part) about this exhibit was the live video. Downstairs, there was a section called Blitz Denim. 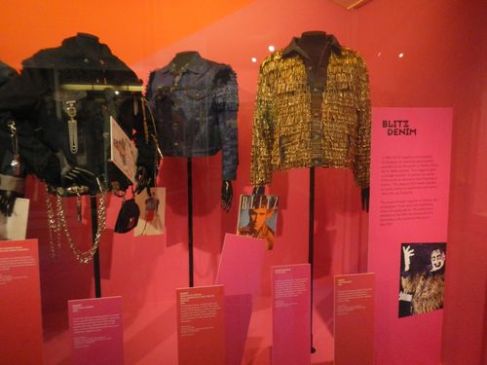 This is a picture of the Blitz Denim jacket made by Leigh Bowrey, and commissioned by Levi Strauss and Co. There is actual footage next to the exhibits of all the jackets (thank you whoever illegally took this picture and posted it) when they first hit the runways so it’s like a giant collaboration of fashion shows.

Blitz magazine was THE magazine of the 80’s. It was a monthly published magazine featuring media, fashion, pop and culture founded by university students.

Leigh Bowery was a designer and performance artist who ran the night club “Taboo”. That was one of many clubs at the time that were hip in the 80’s. Others included Cha-Cha, Circus, Asylum and Hell. John Galliano even said of Bowery’s club, “In the mid-eighties, there was only one place to be. Taboo was the best’. There was an entire dark room dedicated to about 15 TV screens and each of them featured different footage from the different clubs I just mentioned. The 80’s was a period of freedom and avant garde fashion. There was also one screen that showed the Body Map fashion show.

In the words of Georgina Godley “It was an era of unadulterated creativity. The words commercial or accessible were not in out vocabulary”.

Westwood and Mclaren opened a shop called “Sex” which featured bondage and fetish wear that one could wear to the club scene. The coolest collection title I saw was by Body Map and it was “The cat in the hat took a rumble with a techno fish”

This is a picture from the collection featuring model Scarlet Cannon.

The last piece I’ll talk about is the Post Office Jacket. It was made by Christopher Nemeth and it is made entirely out of post office bags…I thought it was pretty amazing.

Basically, someone take me back to the 80’s…

One thought on “Would You Let You In?”